The International Manufacturing Technology Show (IMTS) attracted more than 85,000 attendees from Sept. 12–17 at McCormick Place in Chicago. The trade show, held every two years, is where industry professionals from around the globe connect to:

Trade show marketing is challenging to begin with and it’s especially difficult for a manufacturing company to stand out from the crowd at IMTS, which is spread through several floors in four connected buildings at the convention center. For example, among the 1,272 exhibitors there were scores of companies with CNC machining setups, and dozens with demos of robotic arms picking up parts or playing chess. The show is crowded and noisy from conversations and the humming of machines. The result for someone walking the floor is a spectrum of senses that ranges from sameness to over choice.

Here are a few of our observations about the state of manufacturing trade show marketing based on our collective experience at IMTS 2022:

Manufacturing Has the Blues

Without a doubt, the dominant marketing color at IMTS was blue. It’s understandable why manufacturing companies would turn to this color when thinking about their brand identity. The color is associated with innovation and exploration in color theory — thanks to its primary derivation from the sky and the sea. But when you rely on blue to call attention to your company in a sea full of similar shades, it makes it hard to stand out.

Moreover, many of the exhibitors chose similar types of blue — royal blue being dominant —and combined it with white and black, which are essentially absences of color. In this branding scheme, blue effectively becomes the only color. In other words, it doesn’t give you many options. 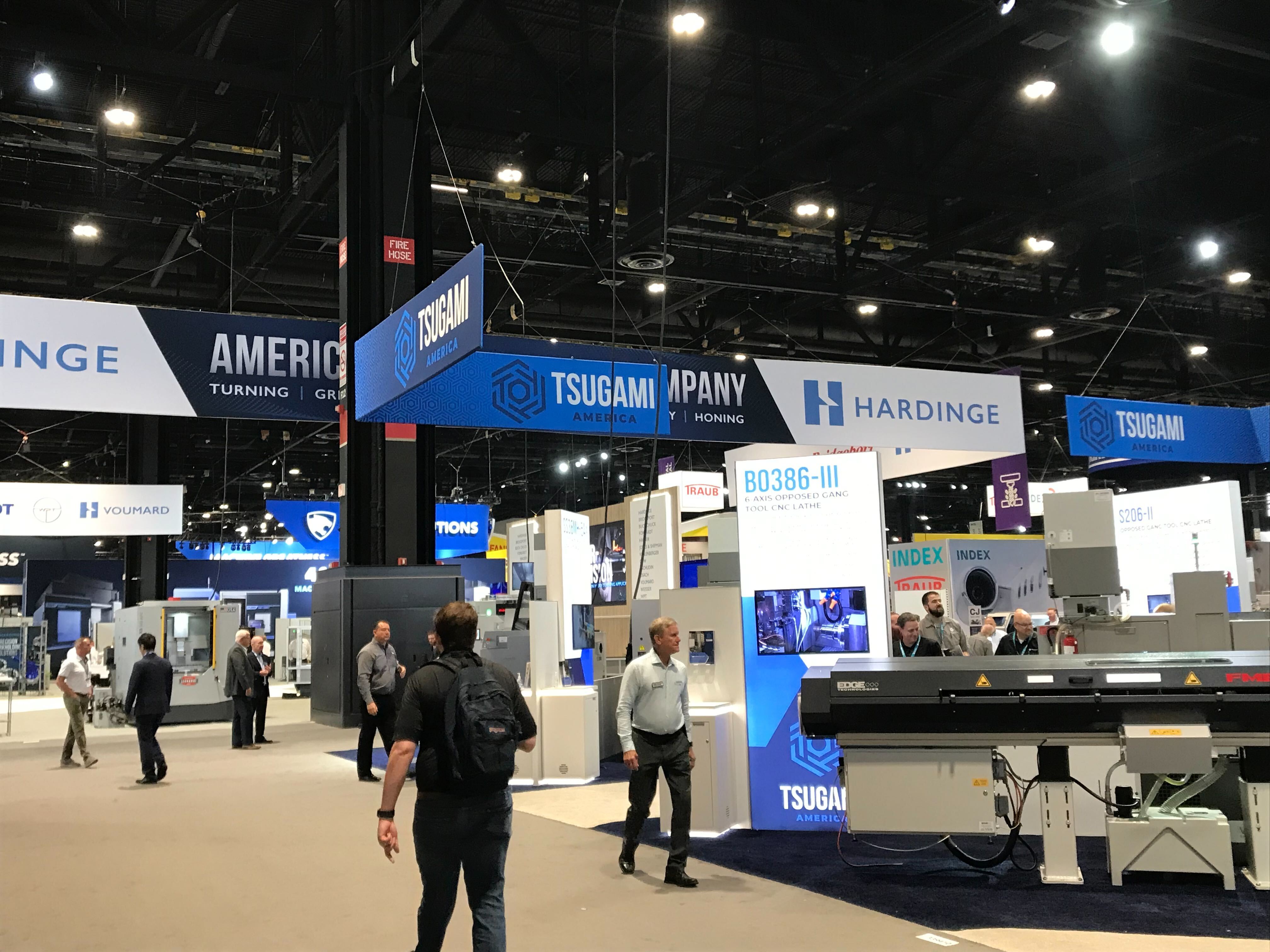 Blue signage was everywhere on the floor of IMTS 2022.

The result of this overreliance on blue at IMTS was a visual field of homogeneous signage. This sameness was further exacerbated by the near categorical reliance on sans serif font and logotypes. As with the selection of blue, the selection of this genre of typography is understandable — it’s certainly more modern than the serifed alternative — but it further contributed to the overall monotony of exhibitor branding.

It's an Experience, not a Display

Without a doubt, one of the most stunning examples of trade show marketing at IMTS 2022 was the UNITED GRINDING booth in the North Building, just off the main promenade and opposite the Main Stage. Placed right at the entrance, the UNITED GRINDING installation was designed to overwhelm and draw you in — dazzling you into thinking that there wasn’t any need to venture further into the exhibition hall.

Moreover, when you got into the booth, there was plenty to do and see. Of course, there were sales team members who were ready to talk and to demonstrate UNITED GRINDING’s new C.O.R.E. operating system. But this stand-out trade show marketing presence also included displays, a quiz, and an inviting long bar. To gain access to the complimentary draft beer and full-kitchen menu, you had to earn a special pin by interacting with a UNITED GRINDING staff member who would award you with the authorizing token. 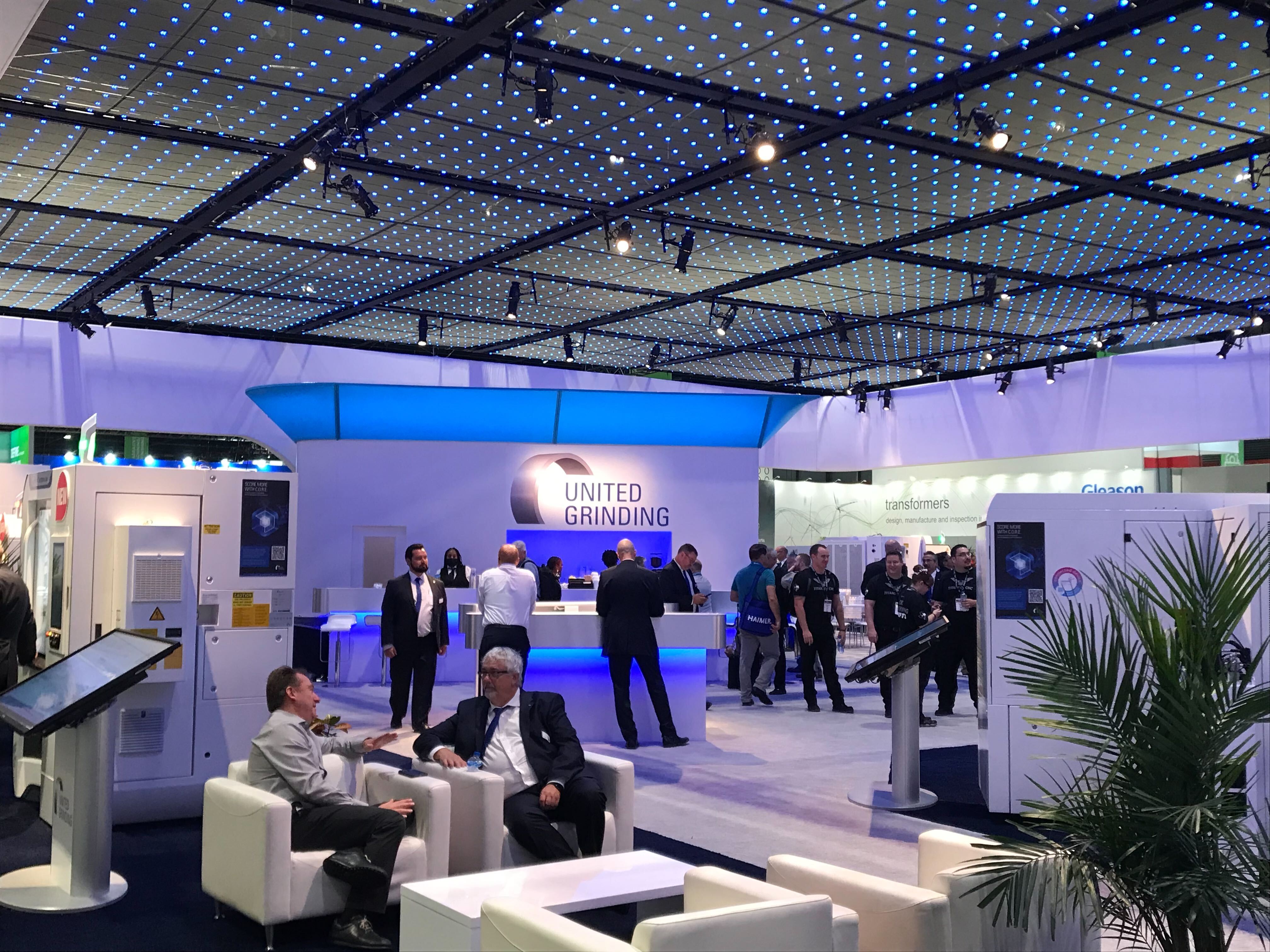 The beguiling environment inside the UNITED GRINDING booth at IMTS 2022.

Once you were in, why would you ever leave? It felt like everything you could possibly need was already there, as UNITED GRINDING took a page from the corporate strategy of creating campuses that captivate employees with amenities. It was truly an experience.

Robots Do Marketing, Too

A big emphasis on IMTS this year was on robots, which present possible point solutions for increasing efficiency and precision, but also addressing larger sector-wide issues such as the persistent skilled labor gap.

And while there were many amazing robotic innovations on display, perhaps one of the most striking was how robots were enlisted to market and sell themselves. Productive Robotics did this incredibly effectively with displays showing their cobots performing common tasks, such as deburring, inspection, machine tending and assembly. In other words, the robots showed passersby what they do, cleaving to the “show, don’t tell” marketing mantra in a literal, highly effective way.

Another great example was at the FANUC pavilion, where one robot moved around boxes that had been tagged with words describing some of its key features, letting the automaton tell its own story. Another quickly spun around an expensive sports car without scratching it, showing its care. And another repeatedly lifted a metal square labeled “2,000 lbs.,” showing off its strength. In these ways, the robots were able to express themselves. 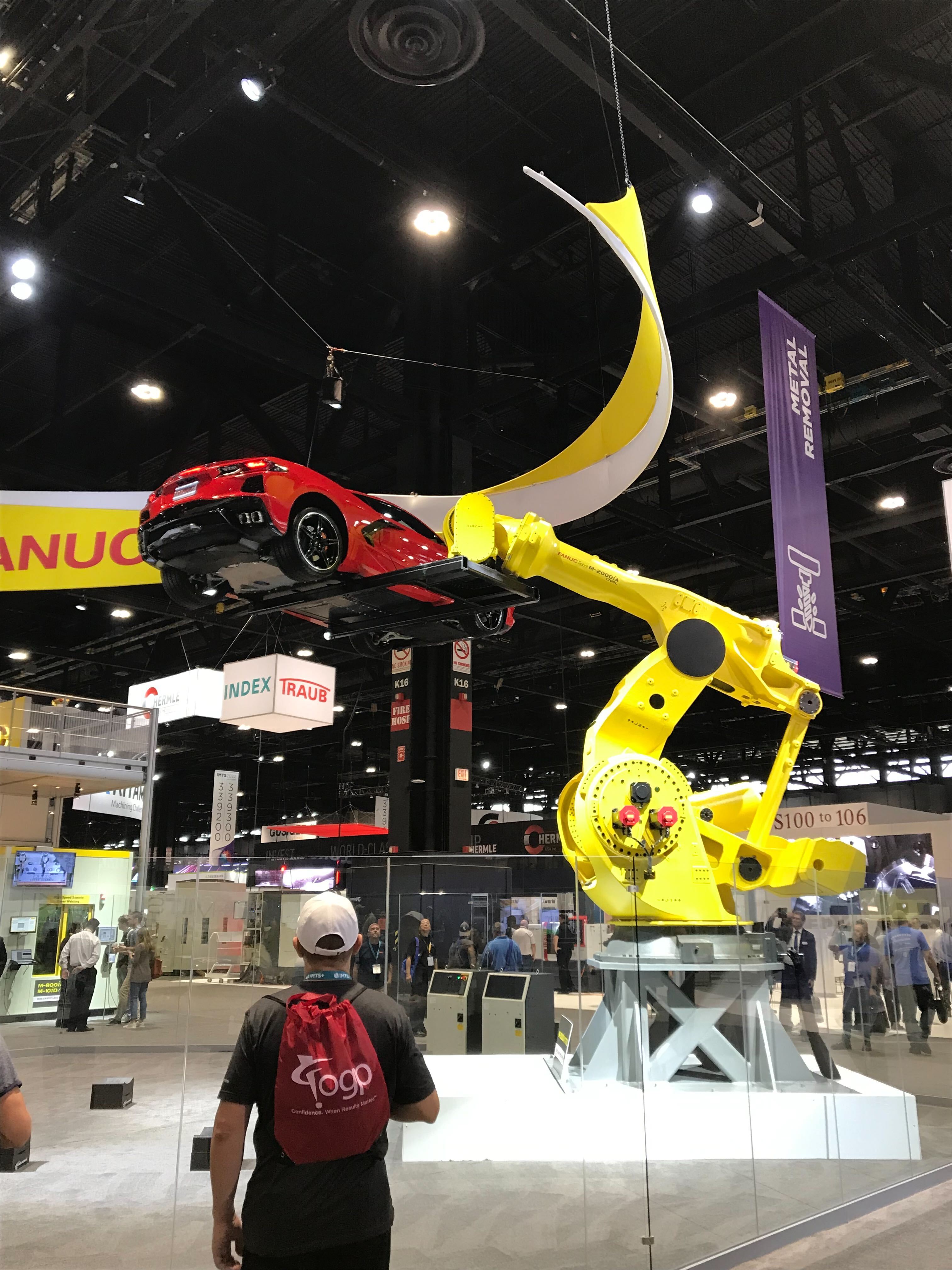 A robot swings around a sports car at the IMTS 2022 FANUC booth.

The Show Is Moving to the Screen

How did IMTS address this issue? With massive LED screens that broadcast the events on the Main Stage at key locations. Caught in the West Building, which is about a 10-minute walk to the Main Stage? No problem. The LED just outside the West hall brought the presentation to you. 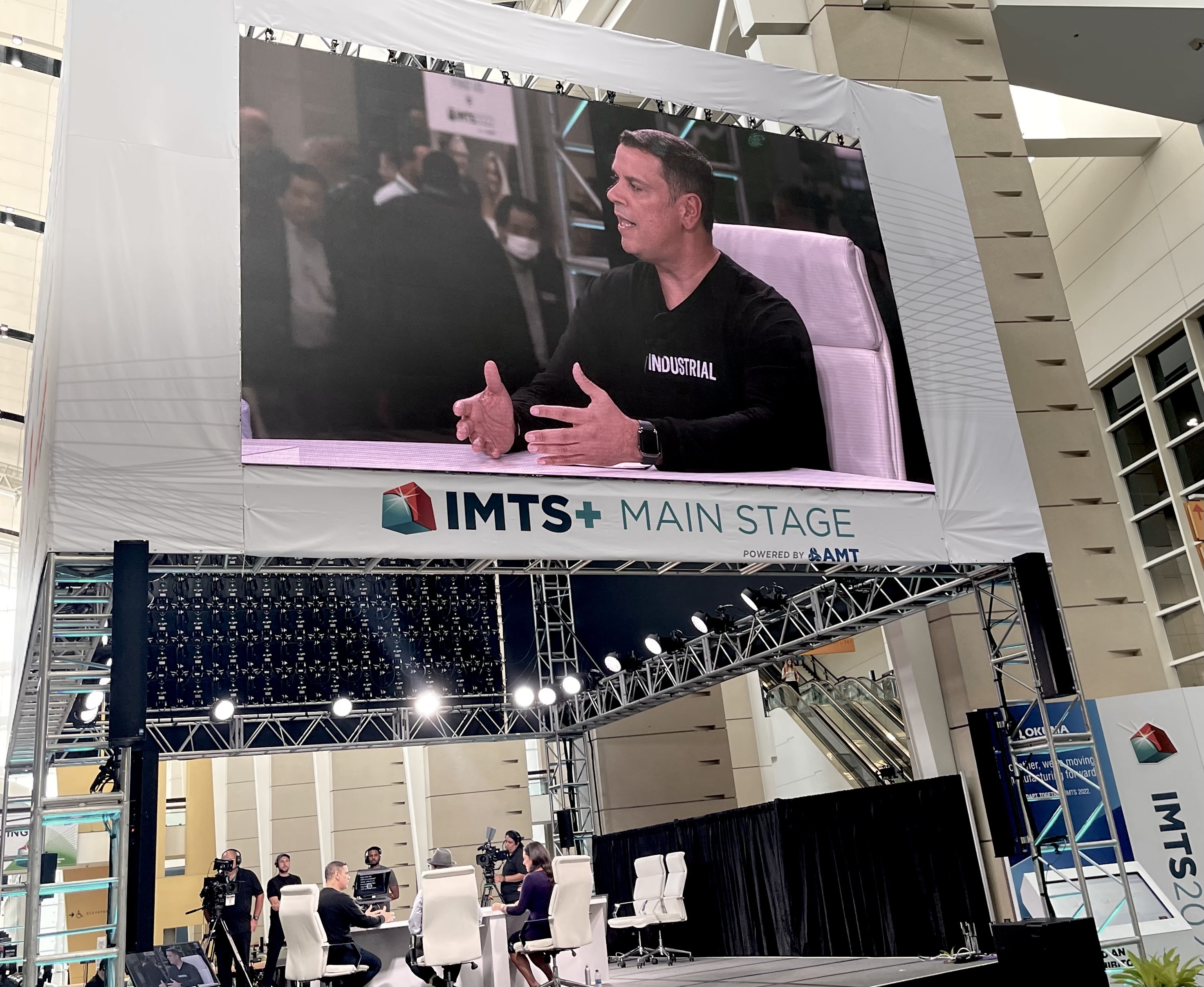 This site-specific broadcasting is part of a larger initiative to extend IMTS’s reach by taking it online. Some IMTS programming, such at the IMTS+ Creators Lounge, were also live streamed during the show to reach a broader audience outside the exhibition halls — or those confined to their booths!

IMTS recognizes that its audience can’t be everywhere all the time. This means a shift in thinking toward multiplying the ways the show can make its programming accessible, giving stakeholders several options for engagement so that they don’t miss anything important. Future trade show marketing efforts should take this into account, putting just as much of an emphasis on what is happening on screen as on stage.

We Can Learn from the Children

Attendees were wowed by cool innovations, but there also were “future workforce” takeaways all around, from the hands-on aspects to the number of girls leading demonstrations to how easily participating entities connected with younger people. It was also inspiring to have a 15-year-old show the audience how a closed manufacturing system can grow a human knee ligament in 45 days.

Talk to Us for Help With Your Trade Show Marketing Strategy

It’s difficult to stand out at the bigger manufacturing trade shows, but you can still create a bond with your prospect or customer and push them closer to purchase.

Need help with your next trade show? Or trying to figure out how trade shows fit into your larger marketing strategy? Visit our B2B integrated marketing services page to learn how we can help you plan, launch — and measure — your marketing program, including your trade show experience.

MAKE MARKETING THE STRENGTH OF YOUR BUSINESS

We can help you develop strategies for winning more business

article Marketing for Manufacturers: Measure Your Way to Success
Subscribe